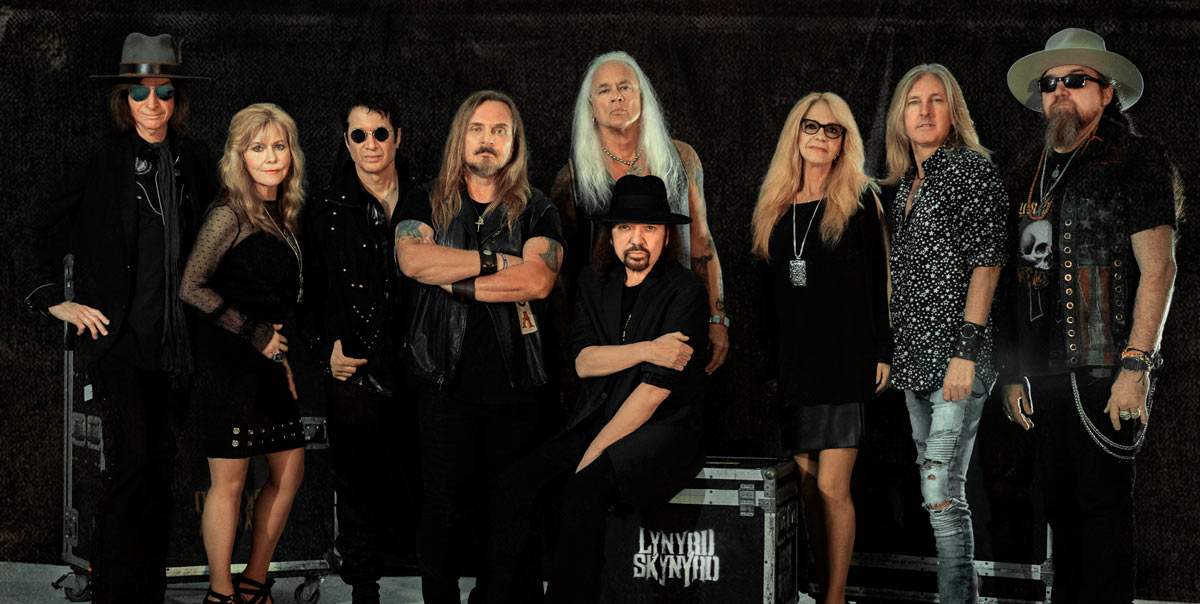 Legendary rock band Lynyrd Skynyrd returns with a fiery slice of Southern style guitar rock heaven in Last of a Dyin’ Breed, their newest release on Roadrunner/Loud & Proud Records due August 21, 2012. This is the kind of record guaranteed to feed the needs of the multi-generational Skynyrd Nation, and continue the renewed vigor the band exhibited with their last album, 2009’s God & Guns.

For the passionate, longtime fans of the band, this is Skynyrd at the top of their game, complete with instantly memorable songs, more hooks than a tackle box, and a blistering three-guitar attack at full power. From the raging guitars of the title track and the pounding, funky homage to local talent in “Home Grown” to the mind-blowing “Honey Hole,” Lynyrd Skynyrd sound like young bucks having one hell of a good time, which, regarding the latter, founding member Gary Rossington says is very much the case.

“For me this is one of the happiest and most fun albums I’ve ever done,” says Rossington. “We didn’t have a lot of problems goin’ on; it was just fun goin’ to work every day.”

Having survived enough tragedy and just plain hard miles for 10 bands, Skynyrd is, remarkably at this stage of their career, on a roll. God & Guns debuted at #18 on the Billboard Top 200, giving the band their highest debut since 1977.  Last Of A Dyin’ Breed  re-ignites the in-studio alchemy the band found with Guns producer Bob Marlette, and the sound is traditional Skynyrd blended to perfection with the edge of immediacy. In short, it’s rock ‘n roll for the times.

Led by core members Gary Rossington (guitar), Johnny Van Zant (vocals) and Rickey Medlock (guitar), Skynyrd has recorded an album that continues to build on the legacy that began over 35 years ago in Jacksonville, Florida. Joining them in the studio and on the road are new bassist Johnny Colt (Black Crowes, Train) guitarist Mark “Sparky” Matejka (a “Nashville cat, just a pickin’ fool,” according to Rossington), and keyboardist Peter Keys, who replaced Powell on the God & Guns tour.

In a tragic tale oft-told, the Skynyrd story could have ended in a Mississippi swamp with the 1977 plane crash that killed three band members, including Ronnie Van Zant and Steve Gaines. Since then, the band has lost vital players in Billy Powell, Ean Evans, Allen Collins, Leon Wilkeson and Hughie Thomasson, yet here they are again with a hard-rocking, stirring album that can sit proudly alongside any recording that bears the Skynyrd name. The breed may be nearing extinction but Skynyrd is very much alive and ready to throw down.

Van Zant, now in his 25th year standing where his brother once stood agrees with Rossington about the making of Breed. “We worked with Bob Marlette again who’s a great guy we just love as a producer,” he says. “During the recording of the last album we were going through Billy and Ean passing away, and with this album we were able to laugh and joke a lot.”

Medlock says that after the hard touring behind God & Guns he and the other primary writers Van Zant and Rossington took their time writing the songs. But the actual recording came together quickly, aided by the band’s in-studio chemistry. “This time what we wanted to do was go back to doin’ stuff old school,” he says. “A lot of the album was done with all of us in the recording studio, playing all at one time, the way we used to do it when we’d go into the studio to make records.”

With a catalog of over 60 albums, sales beyond 30 million worldwide and their beloved classic American rock anthem “Sweet Home Alabama” having sold over two million ringtones, Rock & Roll Hall of Famers Lynyrd Skynyrd remains a cultural icon that appeals to multiple generations. But far from resting on their laurels, any illusions that this may be a band at anything less than the height of its powers are quickly lost with the distorted fury of the fiery guitar licks that open the album’s title track and further put to rest with the gritty triumphs that follow.

They could easily continue cranking out old songs to rapturous audiences around the world but the fact is they’ve got plenty left to say musically, personally and as social commentary. “Every once in a while the record label will ask us if we want to put a new album out and we always say yes, because, although we love playing all the classic stuff, it’s fun to do new stuff too,” says Rossington, “for our own heads, our own peace of mind.”

Lynyrd Skynyrd is a band of today, carrying a steely mantle forged in the sweaty confines of the Hell House in Jacksonville decades earlier. And this is a band album, to be even more specific, a guitar driven band album. The triple guitar assault has never sounded more on point, with passionate musicality, expert harmonics and of course, plenty of attitude to burn. There’s a reason this is one of the most beloved bands of all time.

“We tried to go back to the old sound, doin’ it as a band, goin’ in all together and layin’ it down,” says Rossington. “On the last album, we leaned a little more country, back to our roots, but this time we just tried to be our old selves and write some Southern rock. Just good ol’ songs, get in and get out, say what they say, do a little bit of pickin’ and tap your feet.”

Those searching for traditional Skynyrd solos and fierce instrumental breaks will have plenty to love on Breed, with every song featuring ample fretwork from one, two or even all three guitarists. “We love to do the harmonies and stuff with lead guitars,” says Medlock. “That’s a Skynyrd staple, and we embellished on it quite a bit this time around. We wanted to make a guitar driven record and have the vocals sit really good in the saddle there with all the guitars, just have it more rockin’ and a lot more powerful.”

Mission accomplished, with plenty of fireworks and rock-solid rhythms from all players. “Sparky has just fit in great with Rickey and Gary, everybody knows their place now,” says Van Zant. “Sparky’s a strat guy, Gary’s a slide guy with the Les Paul sound and all those great fills, and Rickey’s the ‘all-around’ guy that does a little bit of everything.”

But the guitars and other instruments—Keys’ organ, for example, play a vital role in the soundscape. Van Zant’s vocal chops and way with a lyric have never been in finer form, breathing life into these songs and taking on some serious vocal challenges. “I quit smokin’ a year and a half ago, so that helped out quite a bit,” he says with a characteristic laugh.  “Workin’ with Bob is great too. We cut the vocals right in the control room itself, which is real cool to me, because me and Bob go back and forth right there, so you’re not waiting for a button to be pushed. It’s just a real cool vibe. We’ve got a good thing goin’ here.”

They’ve got a good thing going in terms of material, too. The primary Skynyrd writing team of Rossington, Medlock and Van Zant worked with some of their favorite songwriters to pen the songs that populate Breed, including Tom Hambridge, Blair Daly, John 5, Donnie Van Zant, and Marlette, along with contributions from the bands Matejka, as well as Marlon Young, Audley Freed, Shaun Morgan from Seether, Cadillac Black’s Jaren Johnston, and label mates Black Stone Cherry’s Chris Robertson and Jon Lawhon.

The blend of writers from within and outside the band concocts a hard-hitting cadre of songs that fit perfectly into the Skynyrd canon. These songs are of the 100-proof variety. “We like bringing in outside influences and I love feeding off other people,” says Van Zant. “I’ve had people ask me, ‘how could Gary create another ‘Free Bird?’ We don’t even try that. Those are legendary songs. We just write what we write. It’s more about us just hangin’ out and being together and enjoying life and writin’ songs. My theory is like Ricky Nelson’s, ‘you can’t please everyone, so you’ve got to please yourself.’  If you’re happy with it at the end of the day, so be it.”

Not as overtly political as its predecessor God & Guns, Breed focuses more on the struggles of the working class, though the band make their thoughts on the direction of this country crystal clear on songs like the reverb-drenched “Poor Man’s Dream” and the blue-collar powerhouse “One Day at a Time.” “When we go in to record, we don’t go in with one certain mindset,” says Medlock. “We just go in and write about stuff we believe in, our experiences.”

The band is tuned in to the tough times many Americans are going through, and they sing songs that might well help on that journey, or at least help let off some steam. “Skynyrd really thinks about how people are struggling and what’s goin’ on out here,” says Medlock. “We see it a lot, because we’re a working man and working woman’s band. We’ve got three generations under our belts, we know people have a tough time out there, and we share in that.”

Gary Rossington won’t typically volunteer for political talk but he is an astute observer, and what he sees sticks in his craw. “I don’t like to talk politics,” he admits “I just don’t trust a lot of politicians. I think the country’s way off track, but we’ll get it back on, it’s too good of a thing to lose. We travel all around the country, there’s too many good people and good Americans who all want the same thing, just to get back on track the way we used to be.”

Like it or not, with a title like God & Guns, the previous album was bound to be a lightning rod out of the box. “I couldn’t believe how well God & Guns was accepted when it came out, in Europe, Australia, South America, here in the States; everybody we talked to, 99% of it was positive feedback,” says Medlock. “My whole thing was, we’ve got to go in the studio this time and step up, we’ve got to do at least what God & Guns did, or one better. And, in my opinion, I think we accomplished that. I’m looking forward to going out and playing some of this record live, along with our classic material, and taking it to the people and letting the people make their decision.”

Odds are, the “people,” specifically, the aforementioned Skynyrd Nation, will love Last of a Dyin’ Breed, and anyone who hasn’t checked into what this band has been up to for a while will likely be blown away. As for their part, Skynyrd will, per usual, indeed be taking their music to the people, as fans in Europe and North America will have a chance to catch the band on tour through the end of 2012 and beyond.