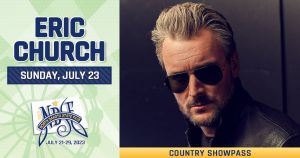 “We are so excited to be able to announce one of our 2023 acts to keep up the holiday cheer,” says Renae Korslien, NDSF General Manager. “Church has been on our list to get back to the Fair, so we wanted to share the great news!”

Eric Church’s most recent critically acclaimed and chart-topping project, Heart & Soul, is available everywhere now. Featuring the results of a marathon session during which he spent nearly a month writing and recording a song per day while sequestered in rural North Carolina, the project features his latest Gold-certified No. 1 “Hell of a View” and recent Top 5 hit “Heart On Fire” as well as current single “Doing Life With Me.”

A seven-time ACM Award winner, four-time CMA Award winner (including the 2020 award for Entertainer of the Year) and 10-time GRAMMY nominee, Church has amassed a passionate fanbase around the globe known as the Church Choir as well as a critically acclaimed catalog of music. His previous project, Desperate Man, earned a GRAMMY nomination for Best Country Album (his third nod in the category). Prior releases include, Sinners Like Me (“How ’Bout You,” “Guys Like Me”), Carolina (“Smoke a Little Smoke,” “Love Your Love the Most”) and Mr. Misunderstood (“Record Year,” “Round Here Buzz”), The Outsiders (“Like a Wrecking Ball,” “Talladega”) and Chief (“Springsteen,” “Drink In My Hand”), as well as 30 Gold, Platinum and multi-Platinum certified singles.

Tickets for the 2023 North Dakota State Fair will go on sale at a later date to be announced. To stay updated on additional acts to be announced, please subscribe to our e-mail list at ndstatefair.com.

The North Dakota State Fair is the largest annual event in North Dakota. The nine-day event is host to around 300,000 people and is held the third week of July. This year’s dates are July 21-29, 2023.