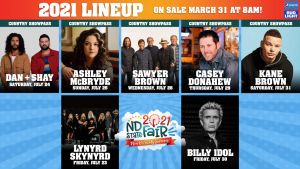 Legendary rock band Lynyrd Skynyrd returns with a fiery slice of Southern style guitar rock heaven in Last of a Dyin’ Breed, their newest release on Roadrunner/Loud & Proud Records due August 21, 2012. With a catalog of over 60 albums, sales beyond 30 million worldwide and their beloved classic American rock anthem “Sweet Home Alabama” having sold over two million ringtones, Rock & Roll Hall of Famers Lynyrd Skynyrd remains a cultural icon that appeals to multiple generations. But far from resting on their laurels, any illusions that this may be a band at anything less than the height of its powers are quickly lost with the distorted fury of the fiery guitar licks that open the album’s title track and further put to rest with the gritty triumphs that follow.

For Dan + Shay, the last twelve months have seen GRAMMY, Billboard, ACM, CMT, and Teen Choice Award wins – most recently snagging several CMA Awards nominations, and the accumulation of over two billion on-demand career streams. The pair have already sold out headlining US & UK tours in 2019, where they performed from their ever-expanding array of hits, including their most recent chart-topper, “All To Myself,” their 2x-Platinum, multi-week No. 1 single “Speechless”, and the most-streamed song released in 2018, multi-Platinum, multi-week No.1 global smash, “Tequila.”  All three are featured on Dan + Shay, which has sold more than one million album equivalents and debuted at No. 1 on Billboard’s Top Country Albums chart the same week “Tequila” reached No.1 on the Country Airplay chart, marking the first time since 2009 that a duo or group has topped both charts simultaneously.

Commended by The New York Times as “an alluringly flexible singer, fluent in classic country, blues and Southern rock, with a voice that moves easily from tender to tough,” Ashley McBryde’s GRAMMY-nominated Girl Going Nowhere earned the Arkansas native critical acclaim from Rolling Stone, Variety and more with The Washington Post raving, “McBryde’s blue-collar storytelling and straightforward singing set her apart.” The seminal title track on the Jay Joyce-produced LP continues to propel McBryde’s career to great heights with recognition in 2019 by the Academy of Country Music as New Female Artist of the Year, CMT’s Breakthrough Video of the Year and CMA New Artist of the Year. For tour dates and more information, visit AshleyMcBryde.com

Sawyer Brown has done more than 4500 shows and continue to perform all across the nation. They have twenty-three albums, more than 50 chart singles, and multiple CMA, ACM, and CMT awards on the shelf. They’ve displayed a constant excitement since the very first time Sawyer Brown stepped foot onstage in the early 1980s. The band has earned its place as one of the premier live acts in music. The band began by playing 275-300 nights a year for the first decade or more of its career—and has never come off the road.

In just over 10 years, Casey Donahew has risen from being a favorite on the local Texas music scene to a nationally popular touring act who has racked up 13 No. 1 singles and consistently sells out venues across the country. His 2011 album release, Double Wide Dream, spawned three No. 1 singles: the title track, “Double Wide Dream,” “Let’s Not Say Goodbye Again,” and “One Star Flag.” Donahew released his most recent studio album All Night Party on August 19, 2016 and it immediately rocketed to No. 3 on the Billboard Top Country Albums Chart, No. 13 on the Top Album Sales Chart and Top Current Album Sales Chart and No. 40 on the Billboard 200 Chart.  The hot project also took the No. 2 spot on the Internet Albums Chart and landed at Np. 3 on the Independent Albums Chart. Donahew’s single “Kiss Me,” from All Night Party, finished 2016 in the #1 position on the Texas charts and is currently climbing the Mediabase and Billboard mainstream radio charts.

Billy Idol was an early architect of the sound, style, and fury of punk rock. He has sold 40 million albums while scoring numerous platinum albums worldwide, nine top forty singles in the U.S. and 10 in the U.K. including “Dancing With Myself” and “Rebel Yell”. Billy was responsible for some of punk rock’s most memorable, literate, and evocative moments and created a pioneering new sound by bringing the spirit of ’77 to the dance floor, going on to fashion an immediately identifiable musical blueprint that integrates club-land throb, rockabilly desperation, and rock’n’roll decadence.

The 4X AMA winner is the only artist in history to notch two titles in the genre’s Top 5 most-streamed songs of all time. “Heaven” and “What Ifs” featuring Lauren Alaina, the record-setting tracks from Kane Brown, are also certified 5X Platinum, making Kane one of only five country artist to achieve that certification twice (along with Luke Bryan, Florida Georgia Line, Sam Hunt, and Taylor Swift). His Platinum-certified album, Experiment, has yielded three consecutive No. 1 Platinum singles, “Homesick,” “Good As You” and “Lose It.” In January 2019, Kane appeared on R&B star Khalid’s “Saturday Nights REMIX.” The crossover track anticipated his collaboration with famed DJ Marshmello, “One Thing Right,” which he dropped in June 2019. In April 2020, Kane dropped “Cool Again,” which closed out that month as the most-added single at country radio and which Billboard called a “song of the summer.” Most recently, Kane dropped “Be Like That,” a breezy pop crossover with Khalid and Grammy-nominated vocalist Swae Lee.

All five country concerts plus two auto events are on the Grandstand Showpass for one price, $110.

The North Dakota State Fair is the largest annual event in North Dakota. The nine-day event is host to around 300,000 people and is held the third week of July. This year’s dates are July 23-31, 2021.