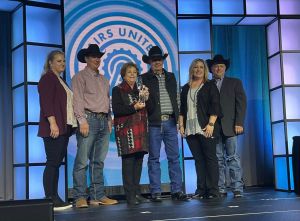 MINOT, N.D. – North Dakota State Fair General Manager, Renae Korslien, was inducted into the International Association of Fairs and Expositions (IAFE) Hall of Fame today at the IAFE Convention and Trade Show in Indianapolis, Indiana. The IAFE Annual Convention & Trade Show is taking place now through November 30, 2022, at the Indiana Convention Center in downtown Indianapolis. The Hall of Fame Award, given annually, is presented to individuals for distinguished achievement in exposition management.

Korslien hails from Newburg, North Dakota, where she graduated from Newburg High School.  She graduated from Minot State University before starting her career at the North Dakota State Fair. Since 1974, she has worked in a variety of roles, starting in the Treasurer’s Office and then transitioning to Accountant and Commercial Sales Director. She was promoted as the Assistant Manager in 2008, and then to General Manager in 2010. Renae has served on a number of Board of Directors in the fair industry and also has been recognized regionally and nationally for her leadership and years of experience. Korslien was recognized today with her two sons, daughters-in-law, and coworkers by her side.

The International Association of Fairs and Expositions is based in Springfield, Mo. and is a voluntary, nonprofit corporation serving state, provincial, regional, and county agricultural fairs, shows, exhibitions, and expositions. Its associate members include state and provincial associations of fairs, non-agricultural expositions and festivals, associations, corporations, and individuals engaged in providing products and services to its members, all of whom are interested in the improvement of fairs, shows, expositions, and allied fields.